Pairing for the first time in a major championship, they conquered Egyptian teams to hold on to the title won in 2015 by Quadri and Kazeem Makanjuola.

The Nigerian duo defeated ageing Egyptians, El-Sayed Lashin and Ahmed Saleh 4-2, to give Nigeria its first gold medal in the one-week championship holding in Agadir, Morocco. 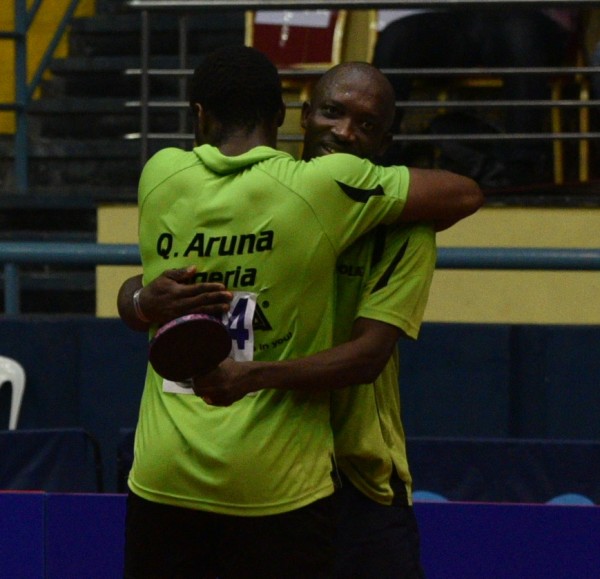 An elated Toriola said: “For us winning this title is very good because I had said earlier that it is a must for us to win this doubles title.”

“But I must also tell you that it was not an easy match because the match was strange to us in all departments.

“Also our opponents are very experienced players and clever, so we are so excited claiming the first gold medal for Nigeria in this competition.”

In the women’s doubles, Egypt’s duo of Dina Meshref and Yousry Helmy won the title.

“Winning the doubles title this year is very special because this is the first time I am partnering Yousra Helmy, who is my cousin and I think we played very together as doubles partner,” said Meshref, who described the victory as special.

“The absence of players from Congo Brazzaville and Nigeria may have taken the shine off the event but what is most important is that we have won for Egypt,” she added.

Meanwhile, the pairing for the semifinal of the singles event will see Quadri square up against experienced Ahmed Saleh.

It will be an Egyptian affair in the second semi-final as Omar Assar battles El-Sayed Lashin.

In the women’s event, Nigeria’s Olufunke Oshonaike will face Egypt’s Farah Abdel-Aziz while defending champion, Meshref, will battle compatriot, Rahmo Aida, for a place in the final.

Tuchel: The ‘hotheaded’ Coach Billed To Take Over From Frank Lampard...

Messi Very Close But Not Quite Close Enough To Diego Maradona

ABOUT US
Newslegend.com.ng is primarily a sports and entertainment website-with everything in between. The website will thrill its readers with the news and features they will love to see on their ideal Sports and Entertainment publications.
Contact us: info@newslegend.com.ng
FOLLOW US
© Designed by CAROUSELMEDIA
MORE STORIES

Mourinho: Pogba Is Ready For Southampton, Zlatan Is Happy At United

Alex Iwobi’s Father: Why My Son Left Arsenal For Everton